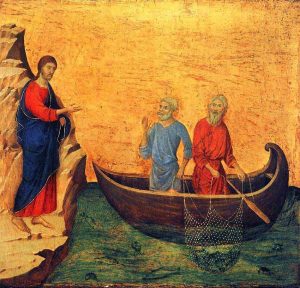 St. Andrew was one of two disciples who were followers of John the Baptist. John, while baptizing, saw Jesus and said, “Look, the Lamb of God!” When the two disciples heard this, they began to follow Jesus. Andrew then told his brother Simon, “We have found the Messiah,” and led Simon to Jesus. Thus, Andrew has been aptly referred to as “The Introducer.”

St. Andrew is also mentioned when Jesus was on the hillside preaching to the masses. When Jesus saw the great crowd, he asked Phillip, “Where shall we buy bread for these people to eat?” Phillip responded, “Eight months wages would not buy enough bread for each one to have a bite!” Andrew said, “Here is a boy, with five small barley loaves and two small fish, but how far will they go among so many?” It proved to be sufficient to feed all present.

The Greeks referred to him as the “Protoclete,” which translated means "first called." He is greatly revered in the Byzantine Church and as tradition has it, he preached the gospel in Greece. He was crucified in Patras in about the year 60 on an X-shaped cross known as the cross of St. Andrew (the Crux Decussate).

We also know that St. Andrew was present at the Last Supper as recorded in the gospels (Matthew 26:20, Mark 14:17, Luke 24:14). Except for these incidents, there is not much written about him in the gospels or in the Acts of the Apostles.

Bishop Michael J. Ready established St. Andrew Parish on June 17, 1955 and appointed Fr. Michael Andrew Nugent as the founding pastor. The parish began with 250 families who gathered to worship at the old Fishinger Road School—now a part of Wellington Academy.

In April 1956, ground was broken on the present site near the corner of Reed and McCoy Roads for a church and a four-classroom school, built under the church. This project was completed in time for the September school year. There were 140 students and four teaching sisters from the Sisters of St. Joseph in Baden, PA.

During the 14-year pastorate of Msgr. Nugent, the school expanded on both sides of the original building, and a wing with a cafeteria and social hall was added. A convent and a rectory were also built to house the sisters. The parish flourished as the number of parish families increased to 1,200. Msgr. Nugent passed away on June 30, 2009, at the age of 92.

In 1969, Msgr. Donald C. Schulz became the second pastor. During his tenure, the parish grew and the school continued to expand with the building of a multi-purpose center and a media center in 1979. In 1988 the parish rectory/office was extended on both sides to provide better accommodations. In 1991 a portion of the convent, which no longer housed the Sisters of St. Joseph, was converted into an art room and a computer lab.

When Msgr. Frank Lane succeeded Msgr. Schulz in July of 1992, the parish had grown to 2,200 families and the demand for adequate space to serve the many activities of the parishioners was increasing. Through the leadership of Msgr. Lane, the parish embarked on the construction of a new church. The groundbreaking ceremony took place on March 17, 1996.

Msgr. J. Colby Grimes was appointed the fourth pastor of St. Andrew Parish to oversee the completion of the project, as well as the renovation of the former church into school classroom space. On June 7, 1998, the new Church was dedicated by Bishop James Griffin.

In 2005, the parish commemorated its 50th anniversary, and acquired the former Masonic Lodge on Reed Road, now called the Bryce Eck Activity Center. In 2006, this building was renovated into a beautiful space for senior activities, youth ministry, and most notably, the home of St. Andrew Preschool.

In 2010 and 2012, improvements to the school cafeteria and adjacent hallways and restrooms were made.

In 2013, a comprehensive, two-phase renovation plan included a complete renovation of the infrastructure and renovation of classrooms, administrative offices, corridors and restrooms; as well as a new multi-purpose room for school and parish use.